The inaugural Dream Cricket Day at Bradman Oval last Friday, 29 October, gave children with disabilities the opportunity to play a game of cricket on the historic Bowral ground. 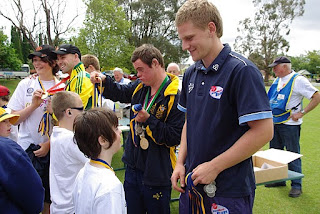 The day saw more than 80 children from the Southern Highlands, Penrith, Goulburn and Queanbeyan given the chance of a lifetime. They were also inspired by World Down Syndrome Swimming Champion Daniel Rumsey, who tossed the coin to start the matches and presented medals to the winners at the end of the day. Daniel won 14 gold medals and broke 13 world records at the event in Taiwan in October.
Photos here.

The Kookaburra men’s hockey team striker Glenn Turner also met the children and presented medals to the winners at the end of the day.
The children also visited the neighbouring Bradman Museum. The day was intended to promote their health, wellbeing and interest in cricket.
The Dream Cricket Day is an initiative of The Movement Disorder Foundation conducted by The Rotary Clubs of Berrima, Bowral-Mittagong and Moss Vale with the support from the Bradman Foundation, the Cerebral Foundation, Northcott Disability Services and many generous sponsors.
Posted by Blog editor at 06:40