Polley family: award, and a video 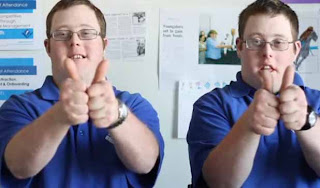 Adam and Beau Polley are identical twins with Down syndrome. That makes them quite unusual young men.  They have grown up in a close family in rural NSW, that has had its share of  highs and difficulties as occur in all families, and on the land.  Their parents Narelle and John have been very open and generous in sharing the boys achievements and adventures with our members over the years - and now, fittingly the whole family has been recognised with an award at the Australian Grand Dairy Awards, designed to honour "highly skilled and pioneering people" in the dairy industry.

Here is the story from North Coast Town and Country Magazine:

Farmers who do it their way
By Mark Gallagher
and Country Magazine, 26th March 2012

The Polleys are something of a fixture in the dairying scene at Kimbriki, west of Taree, with the fifth generation of the fam­ily now involved in the industry. And two members of that generation - and their parents - have attracted the attention of a na­tional dairy association for being an inspiration to other industry participants. John and Narelle Polley and their twin sons, Adam and Beau, now 21, currently milk 69 cows on their 200 acres at Kimbriki. (Another son, Josh, milks a further 80 cows nearby and John's father looks after more of the combined family herd on another adjacent property.) But lots of families run dairies.

What's inspir­ing about this family is that the Polley twins, Adam and Beau, were both born with Down syndrome, but have spent fulfilling lives growing up and work­ing on the farm thanks to the tireless devotion of their parents. The boys have been in­volved with the cows and calves from an early age, their parents say, and used to prac­tise their milking tech­nique on calves, al­though no milk result­ed.

The boys were expert at copying what happened in the dairy and transferred the routine to some presumably con­fused calves.

However their efforts were not wasted, John says, for when it was those calves' turn to be milked as cows, they knew exactly what was go­ing on as they had been trained by the boys. "It's amazing, really, how they're so good with the cattle," John says.

"They can seem to walk up to the cattle and pat them, and get on with them, where with other people they mostly run away ... It must be just their nature and relaxed way about them, I think."

The boys were never frightened of the cattle and could handle them even if they were wild and just be able to calm them down, he says. The boys saved up and bought a "Mule" farm ve­hicle between them and use it to get around the farm and do their chores. They help out in a number of ways, shifting electric fences, feeding calves, rounding cows up, and collecting and putting hay out — up to 12 bales at a time, they point out to me.

Both boys also have part-time jobs off-farm. The boys' time working away from the farm is good for everyone, giving Adam and Beau vari­ety in their activities, their parents say, and also provides a welcome break for them, be­cause their welfare and safety is a con­stant concern and someone has to keep a bit of an eye on them at all times. The family has recent­ly returned from where they |i were presented with an award in recogni­tion of being an inspir­ing dairy family. The trip and accommo­dation were paid for by Dairy Australia as part of the annual Australian Grand Dairy Awards.

The awards, now in their 13th year, are held to "reward outstanding achievement in the dairy industry and recognise the 'best of the best' dairy produce from around the nation. The awards also celebrate the indus­try's commitment to high-quality and innovative products while acknowledging and celebrating the achievements of the highly-skilled and pio­neering people who produce these award-win­ning products," the organisation says. They certainly seem to have got it right with the Polley family - they really are inspiring.


Beau and Adam are clients of BreakThru Employment at Taree, and are the focus of this video about their preparation for working and living independently, including great footage of them at work on the farm.

Click here to see the video on You Tube.

Congratulations all round!
Posted by Down Syndrome NSW at 07:00