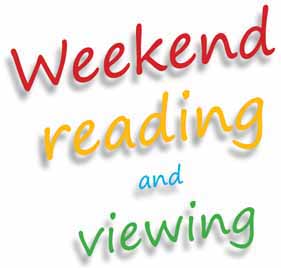 Where great art transcends disability, Amelia Rachel Hokule’a Borofsk, The Atlantic, 13th December 2012. A new article on Judith Scott, the artist whose work is the subject of Metamorphosis, featured in last week's Library Thursday post, and the studio in which she worked.

Is there reason to be averse to Down syndrome? Amy Julia Becker, Thin Places, 14th December 2012

Is our Disability Discrimination Act a bit of a dud? Craig Wallace, Ramp Up, 21st December 2012

Emerging Leader's Awards,National Disability Awards 2012, International Day of People with Disability Australia, 28th November 2012.  Video of the presentation of the award to Gerard O'Dwyer, and footage supporting his nomination.

Executive function, Bill Nason, Autism Discussion Page Series of posts on 'executive functioning' skills, starting on Monday 17th December 2012 - much of this information applies to any people with Down syndrome too.