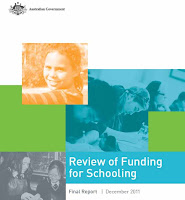 Today, the Australian Government has released the final report of its Review of  Funding for Schooling, produced by an expert panel chaired by businessman David Gonski, and commonly known as the Gonski Review. At 319 pages, the report will take some digesting. We will monitor the media and other sources for commentary and responses that could impact on students with Down syndrome in particular.


Judith Ireland has compiled 'Gonski Review at a glance' for the Sydney Morning Herald ... here are the parts of her summary that specifically relate to students with disabilities at first glance :

Establish a Schooling Resource Standard (SRS)
Gonski says: The Australian government [in consultation with other stakeholders] should develop and implement a school resource standard as the basis of government funding. This would include general funding and loadings for additional costs, such as disability and English language proficiency.
Government says: More work required. Education ministers to form reference group to "confirm whether the elements of the Schooling Resource Standard architecture are designed to deliver the highest standards".

Read more here.
Posted by Down Syndrome NSW at 16:54