People with Down syndrome in the news 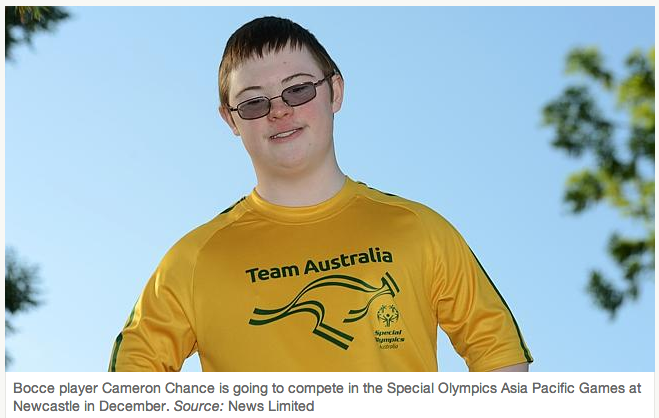 Adam Vidler, Canterbury-Bankstown Express, 21st October 2013
The green and gold will be proudly worn by six ­Canterbury-Bankstown athletes at the inaugural Special Olympics Asia Pacific Games ... Our honour roll includes bocce player Cameron Chance, of Yagoona, who said he was looking forward to playing in the singles and doubles events at the games.

"I am very, very excited to be able to represent Australia," he said. "How amazing." ... 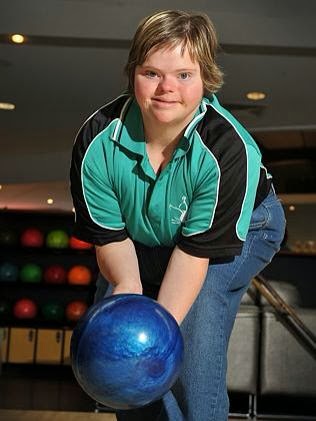 Thanks to her prowess with a bowling ball, Amanda Storey of Mona Vale will represent Australia at the inaugural Special Olympics Asia Pacific Games in December. Ms Storey, who has Down syndrome, is part of the ten pin bowling team along with Josie McLean, of Collaroy Plateau, and Lisa Vineburg, of Dee Why.

"I've been bowling for about 10 years - and I get strikes a lot," Ms Storey, 28, said."My family is coming to cheer me on when I compete (in the Special Olympics)."

Spence Feingold,  The Times of India, 19th October 2013
The meeting between Israeli and Indian youngsters at India Gate early this week was not your average cross-cultural exchange. Both groups consisted primarily of individuals with Down's syndrome ...
The 11 young adults — all in the age group of 20-30 years — were each accompanied by one of their siblings. The group hiked through Corbett National Park, Kasar Devi and Nanda Devi National Park and stayed a few nights in Rishikesh. "We trekked to 4,000m above sea level. The group far surpassed my expectations," said Jaman Singh Rawat, a guide who led the excursion.

"At first I was very nervous and wasn't sure how the group would manage on such an intense trek. In the end it was so amazing," stated Inbal Rotman, who accompanied her younger brother who has Down's syndrome. "Although it was a hard climb, the view from top was definitely the best part of my trip," said her brother, Ilan Bar ...


Glee’s Lauren Potter Hits the Red Carpet
Beth Douglass, Wet Paint, 21st October 2013
We haven’t seen Lauren Potter (aka Glee’s sassiest and most adorable cheerleader, Becky) since last season, but fans of the sweet Cheerio can rest assured: She will be back soon! ...
Posted by Blog editor at 06:00