Chris Bunton - on 'The Nationals', for IDPWD

In the lead up to International Day of People with Disability on 3rd December the annual NSW campaign 'Don't DIS myABILITY' is gearing up. This week, their blog is introducing in more depth, the 2014 Ambassadors who were announced last week.  Here is Christopher Bunton's post about his recent participation in gymnastics at the Special Olympic National Games in Melbourne - just one of the many strings to Chris's bow: 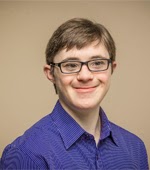 ... At the end of October I traveled to Melbourne with the NSW team to compete at the Special Olympics National Games in gymnastics.

Of course it was a lot of hard work in the gym to get there. I started gymnastics at the age of six, and had my first competition when I was nine. Since then I have continued training and competing at regional, state, national and even world games ...

... read or listen to all of Chris's article, and see some excellent photos here.

Chris is an accomplished young man who has often featured in our blog, you can read about some of his other achievements here.
Posted by Blog editor at 17:56