Down Syndrome Awareness ... and beyond (8)

As we move from October into November, here are some nice 'rounding off' pieces about awareness and where to next, and some links to how Canada is marking it's own Down Syndrome Awareness Week (1 - 7 November):

The Grand Finale
Mumma Love, 31st October 2014
Links to each of this year's 'awareness' posts from various writers published on this blog, in one of the best collections for the year.

So now you are aware
Leahe Thompson, Our Cora Bean, 29th October 2014
... There is much to be learned and taught and shared beyond awareness ... What we all want for our loved ones with Ds and other disabilities really is acceptance. Acceptance that the value of their lives shouldn't be a legitimately debatable subject. Acceptance that people with disabilities belong in our communities, in our classrooms, in our lives. Acceptance that people with disabilities deserve to be able to work for reasonable wages, vote as citizens, and be considered adults with rights that others are granted without question ...


Nicholas Popowich talks about life with Down syndrome
CBC News Saskathewan, 1st November 2014
Nicholas Popowich is an ambitious 24-year-old. He spends half of his working week studying theatre arts at the University of Regina, and the other half working at a SaskTel kiosk in a Regina mall ...

The Canadian  Down Syndrome Society has posted this billboard across the country: 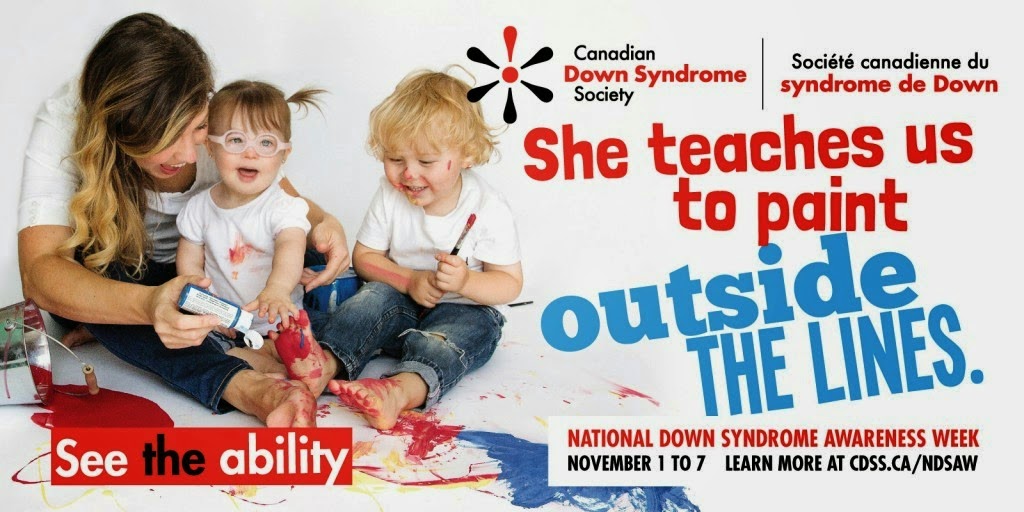