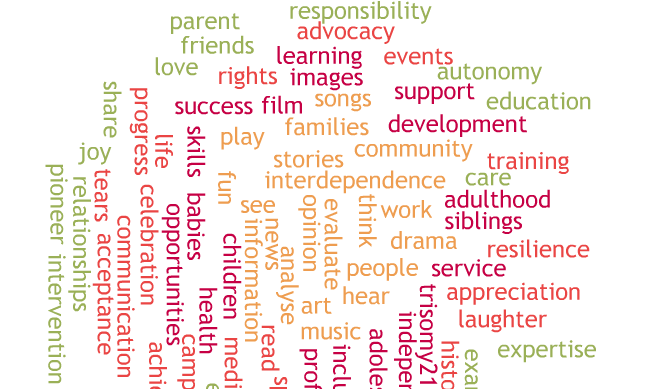 Ellen Stumbo, Hope and Encouragement, 13th March 2015
... a post about parenting in the trenches, whatever that means to you, because mainly this post is about you, the parent, and how you are dealing with the extra needs in your family ... I want to talk to you, my fellow parent who feels wrecked, it is okay to ask for help ...

Ava
Dual Diagnosis (ASC/DS), 16th March 2015
... With our limited knowledge of ASC we’d always ultimately dismissed the possibility that it might be something Ava had, as we believed that people with Autism couldn’t read other people’s emotions, and Ava we’d decided, was very intuitive about how we were feeling ...


5 Reasons Why Music Helps Children with Special Needs
Ryan Judd, Friendship Circle, 13th January 2014
We all know how powerful music can be in our own lives and in the lives of our children, but why is music so compelling and captivating? What exactly is it about music that makes it a great way to connect with and help children with special needs? Let’s take a look ...

Taking The Social Model of Disability Online
El Gibbs, Model View Culture, 17th March 2015
... Today, the same excuses for the offline world are being used for not making the online one accessible: we are mired in arguments about cost, while others say that by making accessibility part of development and testing structures, change is inevitable. I am more sceptical. Despite years of court cases, both in Australia and in the US, major corporations are reluctant to invest the resources to ensure everyone can use their websites and online tools ...

Speaker who uses wheelchair 'carried onto stage' at Melbourne disability summit
ABC News Online, 26th March 2015
Organisers of a national disability conference in Melbourne have come under fire after a speaker had to be carried onto the stage because it was not wheelchair accessible.

Attendees of the sixth annual National Disability Summit, organised by a private provider, said participants with disabilities who paid $2,000 to attend were made to sit together at one table at the back of the room ...

... I came in the kitchen with a head wrap on which I thought very chic and practical, because it was humid and I have wavy hair. He looked up from his cereal grimacing: "What's that?"