... Research released in the medical journal BMJ Open on Wednesday reveals a disturbing pattern of unnecessary deaths in the Australian health system. 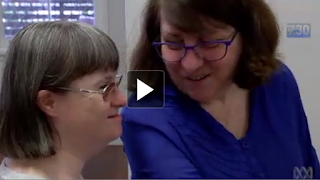 Researchers at UNSW found people with an intellectual disability are twice as likely to suffer a potentially avoidable death compared to the general population.

"We found that one in three deaths in people with an intellectual disability was from a potentially avoidable cause," psychiatrist and lead author Julian Trollor told 7.30 ...


Professor Julian Trollor first noticed something was amiss when he was trawling through death certificate data for people with intellectual disabilities. Over and over again the underlying cause of death was listed as the disability itself, regardless of whether the patient had died of an infection, cancer or a heart attack.

"I thought, this just doesn't seem right," Professor Trollor said. A person with down syndrome who died of respiratory failure caused by pneumonia would likely have their underlying cause of death coded as down syndrome in population records.

"Down syndrome itself doesn't cause the death. Anyone else in that scenario would have their underlying cause of death coded as pneumonia ...

We are keen to see a national effort to close the gap in the disparity in health outcomes between people with intellectual disability and the general population. The National Disability Strategy — and strong governance arrangements for the implementation of the strategy in states and territories — provides a useful mechanism.
It is simply unacceptable that people with intellectual disability in our community are dying from preventable causes at over twice the rate as other Australians. We must close this gap.

Research report - the full text of the report is available online, without charge:

... Adults with ID experience premature mortality and over-representation of potentially avoidable deaths. A national system of reporting of deaths in adults with ID is required. Inclusion in health policy and services development and in health promotion programmes is urgently required to address premature deaths and health inequalities for adults with ID.

NSW Council for Intellectual Disability - petition to the NSW government

We need the NSW State Government to commit $50 million per year for 10 years to put an end to the high numbers of preventable deaths for people with intellectual disability in NSW ...