The 4th International Down Syndrome Swimming Championships were held in Portugal from 29th November to 4th December 2008. 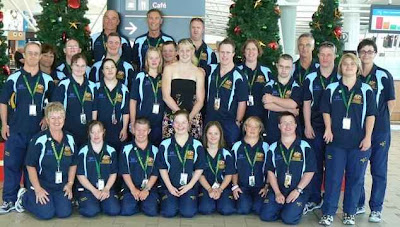 The 20 member Team Australia came through the meet with excellent results, named the Best Team of the Championship, with 84000 points, ahead of UK and South Africa. The total medal count for Australia was

Full results for Team Australia are available from the Down Syndrome Down Under Swimming Organisation's website.
Tahnee Afuhaamango from Darwin was named the overall World Female Champion at the Championships held in Albufeirra, Portugal, having won 7 gold and 2 silver medals, and set six World records during the Championships.
These personal insights and photos are from the families of the five NSW swimmers:
5 Team Australia members were from NSW: Lucy Dumitrescu (Sydney) Greg Blanch (Armidale), Will Brunsdon (Armidale), Brendan Foley (Sydney) and Daniel Rumsey (Bundanoon).
This was the first year that the championships included separate categories for those with Mosiac DS and Trisomy 21 so Brendan, being one of three Mosiac swimmers competing, did really well, winning many medals and achieving personal best times. He was very excited to be producing these times.
Lucy Dumitrescu (see this post for more about Lucy, and pictures) swam really well, achieving her first podium finish at World Championships finishing 1st in the 200m butterfly.
Greg Blanch had swum in Special Olympics before and has been swimming for many years. At the championships he finished 2nd in the 200m backstroke and placed in several relays gaining silver and bronze medals. Greg also swam times in his events he has not swum in many years. 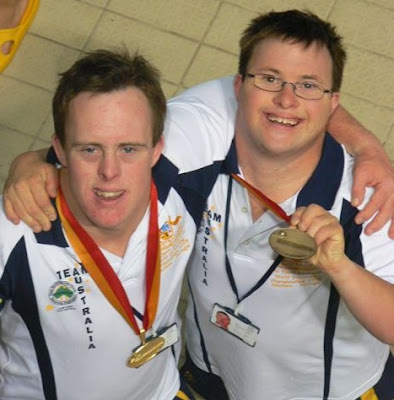 Will Brunsdon and Greg Blanch

Will Brunsdon again swam really well and managed to gain 8 golds and 1 silver medal. He also broke 4 individual and 3 relay world records which was fantastic. 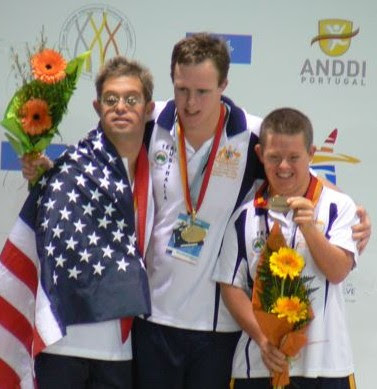 Will Brunsdon (centre) with US swimmer, Andy Meyers, and fellow Australian, Clinton Stanley, from Qld

Daniel Rumsey had an amazing championships breaking world records in every event he swam in except for his last event. He also won 8 gold and 1 silver medal and broke 3 relay and 10 individual world records.
Daniel was the 2nd most successful male swimmer and Will was the third. Australia won the best country with the most points, earned by the swimmers placing in events and breaking world records, and beat the next country, South Africa, by 30,000 points. They won the most successful female and 2nd most successful female also. These were won by Tahnee Afuhaamango, NT and Olivia Sayer, VIC. So a very successful event from all swimmers.
The swimmers were supported very competently by the coaches who accompanied them and all swimmers loved the experience of representing their county and catching up with friends made over the last two years.
This was the first championships to do full medal ceremonies with the flag raising and national anthem sung for each final which was very rewarding for the swimmers. 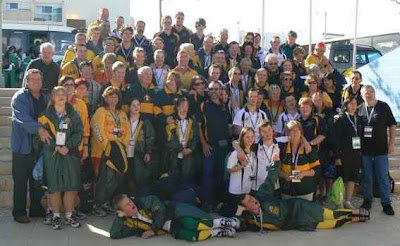 Last day of competition - some tired swimmers down the front!

Congratulations to all who competed, coached, supported and made the event happen. The 5th International Down Syndrome Swimming Championships are scheduled for 2010 in Taiwan.
Posted by Blog editor at 18:59