International Day of People with Disability

Many events have, and still are happening to celebrate International Day of People with Disability. 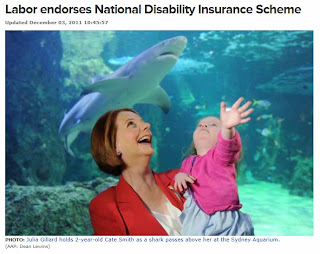 Support for people with disability is on the national agenda, with progress on the National Disability Insurance Scheme at the ALP conference in Sydney.  Cate Smith charmed the Prime Minister over breakfast at the Sydney Aquarium, where the establishment of the authority to oversee the NDIS was announced.  You will also be able to catch a glimpse of Cate and the PM in television news bulletins this evening. The ABC's online report is here, published with this photo (right).

The Opposition spokesman on Disability, Senator Mitch Fifield issued this press release, affirming bi-partisan support for the NDIS, and calling for confirmation of full funding.

Assistant Treasurer Bill Shorten's speech to the ALP Conference in Sydney at the weekend - online audio and trasncript.