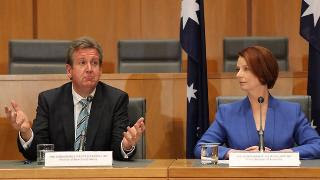 NSW Premier Barry O'Farrell and Julia Gillard talk to reporters at the conclusion of the COAG meeting in Canberra.
Picture: Gary Ramage Source: The Australian

Here is a selection of media reporting and opinion so far:


Urgent need to finalise NDIS deal
The Every Australian Counts campaign for the National Disability Insurance Scheme (NDIS) has welcomed the announcement of three NDIS launch sites in the ACT, South Australia and Tasmania from July 2013 as the start of real reform to Australia’s broken disability system.
However, we urge the remaining states and the federal government to continue discussions to spread the NDIS launch sites to more Australians who urgently need a decent disability support system.

On behalf of hundreds of thousands of people with disabilities, their families and carers, our leaders must compromise and introduce the NDIS as a full, national system of disability support as outlined by the Productivity Commission.
Discussions continue today between the Commonwealth, Victorian and New South Wales – they must reach an outcome as soon as possible to include the Hunter Valley and Geelong, as outlined in their joint NDIS launch submissions. ... read the full media release here on the Every Australian Counts campaign website


You will find more responses on the Every Australian Counts Facebook page and website.
Posted by Down Syndrome NSW at 09:57