Will Becky go to college?


College Urged For ‘Glee’ Character With Down Syndrome 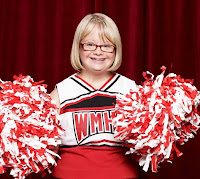 When students on (the TV series) Glee graduated this (US) season, they all headed to college. Now a Twitter campaign is calling on the show’s writers to make the same plan for a character with Down syndrome.

Using the hashtag #College4Becky, a social media push  is encouraging the Glee writers to send Becky Jackson (played by Lauren Potter) to college at the end of the show’s next season. Though the character is believed to be a rising high school senior, little has been said about her future.
... read the full story by Michelle Diament in Disability Scoop

Open letter the writers of Glee, from Think College.