News and commentary on the NDIS (12) 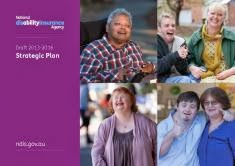 It sets out the goals for the NDIS for the next three years. You may wish to review the Strategic Plan and leave your feedback.

Attitudes and evidence will underpin disability reform
Craig Wallace, Open Forum, 3rd December 2013
There still remain a lot of barriers in our urban landscape for people with a disability. Craig Wallace would like to see a national survey on community attitudes towards disability to give us solid evidence about what these attitudes are and what could leverage change ...

"(It will) also provide a forum where questions of design and implementation can be posed in a way that is not seen to be partisan'" he said ...

The state government has answered more than 50 questions about the shake-up of disability services in NSW after Wednesday’s forum in Newcastle ...

A new program was launched yesterday, with funding from the Victorian Government, called 'LEAD Barwon'. It aims to train people using the NDIS to share their views on the rollout ...
Posted by Blog editor at 08:11