Congratulations to Christopher Bunton, who has been named as a finalist in the 2016 NSW Sports Awards, in the Athlete of the Year with a Disability category.


Chris has honed his skills in gymnastics and as a gymnastics teacher over many years of dedicated training and competition. The cover of the DS NSW Summer 2007 - 2008 Newsletter, featured Tony Stinson's photo of Chris Bunton, taken during competition at the World Special Olympic Games in Shanghai in 2007, as an already accomplished fifteen year old. 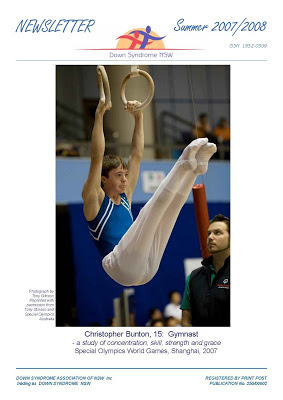 The awards will be announced at a gala dinner in Sydney on Thursday, 23 February 2017.


Now in its 22nd year, the prestigious NSW Sports Awards celebrate the finest achievements by NSW athletes, teams, coaches, administrators and organisations in 2016.

An all-embracing event, the NSW Sports Awards acknowledge the breadth of sporting activity and achievement across the state each year with categories for able-bodied and disabled athletes, young athletes and masters athletes. Awards are also presented for the best event of the year, official of the year and the all important distinguished long service awards for those that have given exceptional long-time service to their sport ... Sport NSW