The National Special Olympic Games were held last month in Adelaide.  Many of the athletes competing were people with Down syndrome.  We congratulate them all on their participation and their achievements.

Highlights from the games are available in online videos on the Special Olympics Australia website.  You might see one or two familiar faces in the slide show of the top of the page.

Among NSW athletes, Christopher Bunton was very successful, as you will read in this story in his local newspaper, the Penrith Star.  Christopher won seven gold medals in men's gymnastics - and he's only 17!

Christopher has a lot of experience in high level gymnastics competition - this photo (by Tony Stinson) was taken during competition at the World Special Olympic Games in Shanghai in 2007, and we were fortunate to have it on the cover of our quarterly Newsletter for Summer 2007 - 2008: 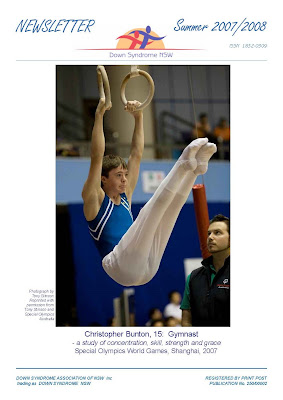 Labels: People with Down syndrome, Sport