NSW ahead of schedule for its transition to NDIS 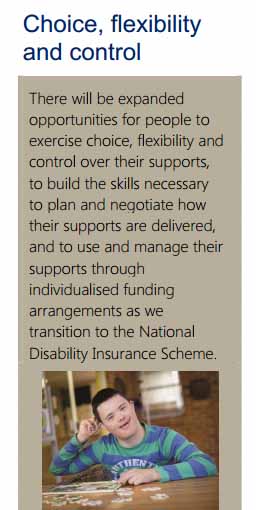 On 3 July 2013, Minister for Ageing and Disability Services, Andrew Constance released the Living Life My Way Framework which will guide the expansion of opportunities for people to exercise choice and control over their supports as NSW transitions to the National Disability Insurance Scheme (NDIS).

While the NDIS is being launched in the Hunter, the NSW Government will continue to implement its Stronger Together 2 reforms to ensure people with disability and service providers are positioned to move seamlessly to the NDIS.

People with disability currently receiving disability services who are interested in moving into an individualised funding arrangement can register their interest by contacting Ageing, Disability and Home Care on 1800 605 489 or emailing livinglifemyway@facs.nsw.gov.au

The framework is based on the findings from the extensive Living Life My Way consultations held across NSW during 2011 and 2012.
Register for regular updates by emailing livinglifemyway@facs.nsw.gov.au

Statement from the Minister for Disability Services, on his previous commitment to make individual funding packages available to all ADHC funding recipients from 1st July 2014
The NSW Government is committed to a service system that increases choice and control for people with disability. For this reason, NSW became the first Australian state to agree to a fully funded NDIS in which we'll contribute $3.1 billion a year from 2018/19, with the Commonwealth to invest $3.3 billion.

You should be in no doubt that Stronger Together 2, and the individualised funding reforms we've embarked on in NSW were the foundations to this historic agreement with the Federal Government.

Without our $2 billion growth monies and the associated reforms in NSW, the NDIS would still be a thought bubble. By embarking on the Living Life My Way consultations in July 2011, NSW is now in a prime position to be 'NDIS ready.'
While the NDIS is being launched in the Hunter, the NSW Government will continue to implement its Stronger Together 2 reforms, including self-directed supports and individualised budgets, to ensure the whole NSW system is positioned to move seamlessly to a NDIS.

We are recasting the growth under Stronger Together 2 to direct even more funding to ensure that people who want the option of a more flexible and portable funding arrangement can have that option. We will do this responsibly, within the existing limited resources available, and in a way that does not require people to change again when the NDIS comes to NSW.

The date of 1 July 2014 is now redundant with the NDIS agreement. We will advance people to individualised support packages where we can and in many cases earlier, while ensuring we're not duplicating systems.

Initiatives under Stronger Together 2 such as the Supported Living Fund have been hugely successful and instrumental in providing that choice and control to over 300 people. The next round of places have just been announced, to deliver individualised arrangements to a further 100 people with disability. This adds to the 7,800 people in NSW who already receive individualised supports.

If you are interested in moving your current services into an individual package you can register your interest by contacting Ageing, Disability and Home Care on 1800 605 489 or emailing livinglifemyway@facs.nsw.gov.au
Posted by Down Syndrome NSW at 06:00