Social media, paying scant attention to national boundaries, will blossom with stories, events and activities highlighting the lives of people with Down syndrome throughout over the next few weeks. In the US, and increasingly elsewhere, October is designated as Down Syndrome Awareness Month, with increasing focus insistence on moving beyond awareness to acceptance and inclusion. 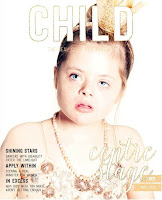 While we officially reserve October's third week for observance, we needn't be too strict about the time frame - there's a lot to do and see. And Canada celebrates Down Syndrome Awareness Week during the first week of November ... so prepared for more blog posts, links and photos. Your contributions are welcome.

With excellent timing, CHILD Magazine has been announced as a finalist in the Publish 2015 awards for Australia's magazine industry. The nomination is for the May 2015 issue  (the diversity issue) featuring Dancers with Disabilities. Revisit the stories and see behind-the-scenes of the cover shoot.

Congratulations to Karen Miles and the CHILD Magazine team, and good luck for 21st October announcement.
Posted by Blog editor at 10:29