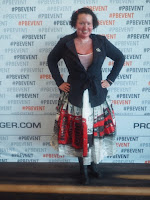 Carly Findlay is a Melbourne writer, speaker and appearance activist with a growing profile in the broader disability activism field, for her her clear thinking and writing, from the perspective of a person with a disability. Several of her blog posts have been adapted in the mainstream press, and they resonate widely.

She is the latest addition to our list of 'Blogs we read' (scroll down the right hand column), and well worth  following on Facebook too.


This weekend, The Age (Melbourne) published an article quoting her criticism of a particular theme of Facebook posts exploiting people with disabilities, and she has expanded it into a blog post published today. We might not all use Facebook, but it can generate attitudes and actions that have an impact in real life - it's not a big stretch to see how people with intellectual disability can be affected:


Stop praying for and exploiting disabled children and adults on Facebook
Carly Findlay, 11th January 2016
... People are stealing photos and using them on Facebook pages and groups. Hell, I saw one 'prayer group', dedicated to sharing these photos, encouraging mindless scrolling and typing amen. What does this achieve?

These posts don't state or explain a diagnosis or aspects of disabilities (not that strangers need to know), humanise the person featured, nor, as Craig Wallace and Jax Brown told The Age, draw attention to any real issues people with disabilities face (like access and employment) ...

Carly posted on Facebook just a couple of weeks ago:
If you're a parent of a child whose photo has been misused in a viral Facebook post, you can fill out this form and submit to Facebook. DeDe from My Warriors Conquering the World did this when Evan's photo was stolen and ridiculed, which resulted in removal of the photo.
Posted by Blog editor at 14:48