People with Down syndrome ... 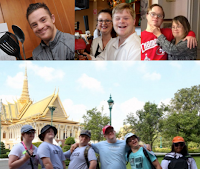 About five years ago, we asked out members whose sons and daughters were adults, what they thought was different from when they were young children. Several things were identified, but the most common response was that people with Down syndrome are so much more visible in the wider community now, and how much better that is ...

Our first day
What We Say, 19 January 2016
A Few Quick Sketches, 20 January 2016
You can follow along with the RUCKUS ensemble's current adventures in Cambodia via blog posts (lots of photos) on What We Say, as well on their Facebook page

A new beginning for Kyran
Bryce Luff, Fremantle Gazette, 12 January 2016
Like many people heading into the new year, Kyran Doak was keen to hit 2016 running. For the popular 21-year-old with Down syndrome, that meant finding a new job and securing an extra bit of independence ...

Photographer has a photo duel with his daughter with Down’s syndrome, she wins
Francesca Kentish, Metro (UK), 19 January 2016
Having spent five years as a professional photographer, Sebastian Luczywo thought he’d got his photography style down. His goal was simply to tell a story in every picture and he was doing that brilliantly, receiving praise from all round the world. But when his 17-year-old daughter Kaja came back from a school trip with five photos of her own, Luczywo knew he still had a lot to learn ...
Disability? What disability? Mansfield man with Down syndrome just carries on

Rick Foster, Sun-Chronicle, 29 December 2015
Christopher LeVangie is a young man on his way up. And that's saying a lot, considering the 24-year-old was born with Down syndrome, an intellectual disability that might have held back a less determined person ...


Mother and son
NDSS, 5 January 2016
Patti White posted on (US) National Down Syndrome Society's Facebook page, a photo with a note about her daughter Lisa (50) and Lisa's son Nic (20 who both have Down syndrome.
Posted by Blog editor at 07:00