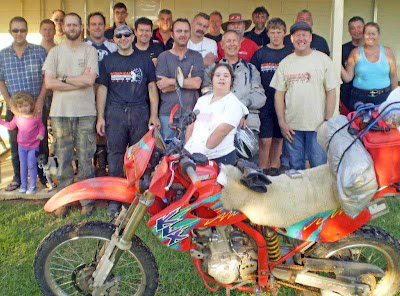 17 riders made it to Wanaaring by Easter Saturday for the inaugural Scrapheap Adventure Ride 2010. Most successfully rode their ‘Scrapheaps’ (bikes which cost them less than $1000, but countless hours of searching for parts, assembly and reassembly, tinkering and more tinkering – true labours of love and perseverance). Accompanied by support crews of family and friends, around 30 people in all descended on this remote outpost, raising the town’s population (136 at last census) for the night by around 20% (that's the equivalent of just over a million extra people visiting Sydney on one day!). 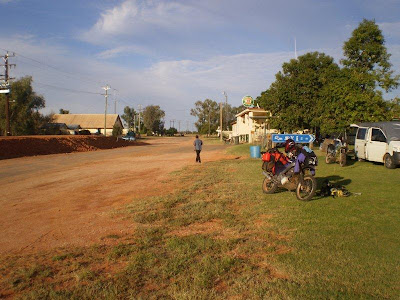 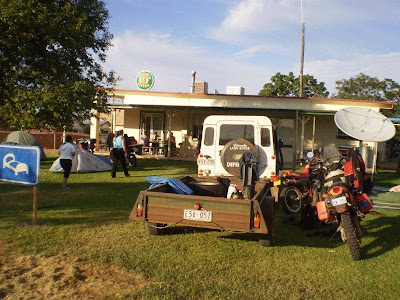 Camping out at Wanaaring Pub
They came from all directions. Trevor rode down from Townsville (over 1500km). David L and Julian rode up from Melbourne. David P discovered the joys of ‘slow touring’, riding up from Sydney on a recently purchased 1980 Yamaha XT250, the same age as Down Syndrome NSW - a fitting tribute for our 30th anniversary year. 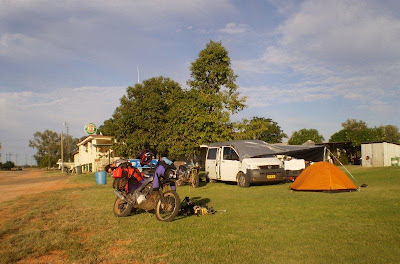 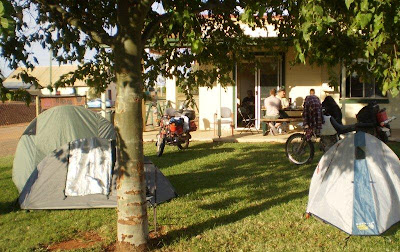 Breakfast, Wanaaring Pub, Easter Sunday morning
Alf rode in on his beloved ‘Voodoo Child’ (definitely no ‘chook chaser’) purchased from Glen Innes motorcycles in 1992, accompanied by Ned on the ‘ruggedly handsome’ Damien. Joe made it up from Vacy (over 900km) on his 1985 BMW, but left the ‘scare chair’ at home (to the relief of many). 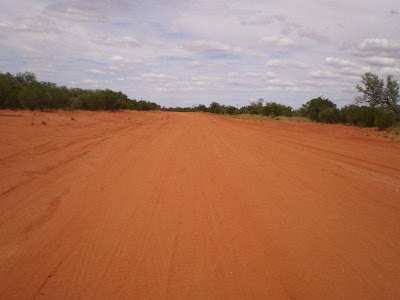 Traffic - Bourke to Wanaaring Road
12 year old Liam rode the farm trails on his Honda XL with the support of his pop Graham - the only thing he smashed was his initial fundraising target of $100. Liam will have a few good yarns to tell back at school. Graham and Liam
Andy and Team CT rode up from Cowra and got the whole town (including the Mayor) behind them. Meanwhile Matty drove more than 1200km from Port Lincoln in South Australia to lend his support, enthusiasm and good humour. 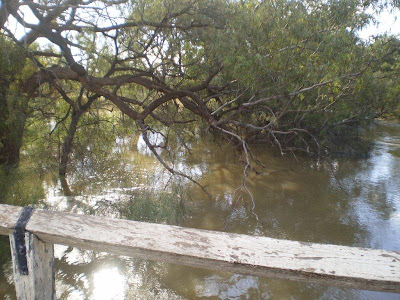 Floodwaters between Bourke and Wanaaring
A few were stymied by the motorcycling gods, and despite best endeavours ended up having to leave their scrapheaps at home and ride their more ‘sophisticated’ machines. They nevertheless made a mammoth effort, and they were very welcome at the Wanaaring Hotel. 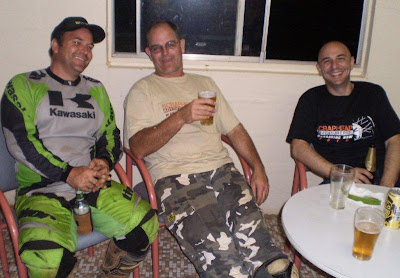 A number of adventurers took the ‘scenic route’, going the long way round via White Cliffs. Others like DS NSW member Rod braved the flood waters and took the direct route (a mere 950 km from Sydney) on his newly acquired ‘postie’, with his wonderful support crew, Fiona and Cassie, and made many new friends (and sponsors) along the way. The Kelly family have raised around $7500 to date, an amazing effort. (Read about their Adventure here).

It was not the motorcycling gods but the extravagance of Huey that almost stopped Down Syndrome NSW CEO, Steve Clarke and his family. They also took the direct route (by 2-wheel drive), and got to within 5 miles of the Wanaaring Hotel just before nightfall before seeing the dirt track in front of them disappear into a miniature lake. With no mobile coverage and not a single other vehicle sighted in the 3 hour drive along the 200km stretch from Bourke it looked like it was going to be a long night. 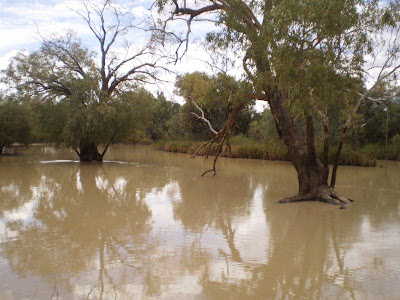 The Paroo River in flood at Wanaaring

Then after about 10 minutes, a distant rumbling of an engine could be heard, followed a short time later by local Susie in her 4 wheel drive. Susie’s vehicle was already packed but she kindly gave our stranded CEO a few extra bottles of water and promised to get an SOS to the Scrapheapers already assembled at the Pub, before driving on through the lake. Within about 20 minutes, Rod appeared on the other side of the floodwaters and led Steve out of the wilderness, around the flood waters on an unmarked detour.

Meanwhile, at the Wanaaring Hotel celebrations had long been underway. It seemed the whole town (note pop. above) had gathered to mingle and swap tales with the Adventurers. The hospitality of publicans Moc and Sheree was enjoyed by all. They had kindly donated some mouth-watering local produce to raffle and auction off. Bidding was fierce for the sumptuous hamper of local port, honey and other treats but congratulations go to Michael of Startrack Express (and brother-in-law of aforementioned Susie) for making the generous winning bid of $200. The next day is was universally agreed by locals and visitors alike to have been ‘a big night’. 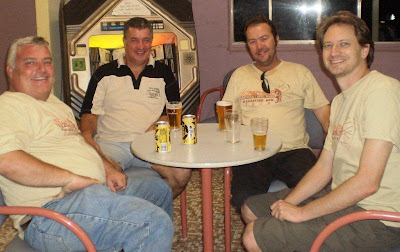 Perry (Pezz), Rod, Joe and Steve ... at the Wanaaring Pub
All proceeds of course go to Down Syndrome NSW for support, services and programs for people with Down syndrome and their families. Congratulations and thanks to all our Adventurers and their crews who have now raised close to $20,000, and a huge thank you of course to DS NSW member Pezz, father of the beautiful Gracie, for turning what seemed like a crazy idea at the time (and still does to most of us) into a reality!
To congratulate our Adventurers and help them hit their collective target of $20,000 go to http://www.scrapheapadventure.com.au

A much more concise report from Alf on Voodoo Child…
‘The Dark Train rolled into Wanaaring in perfect tune, no dirt road, bulldust, *** or high water was going to stop us. We may not have raised the most money, but for a couple of country boys we were pretty sharp. The only road bikes amongst a convoy of chook chasers, we flew the scrapheap flag with pride and our arrival back home was so much sweeter........."THANK YOU" to all of our sponsors, everyone who helped in some way, and all of our well wishers, we done youse all proud!’ Alf (Congratulations Alf for raising over $1000 to date, pretty sharp indeed.) 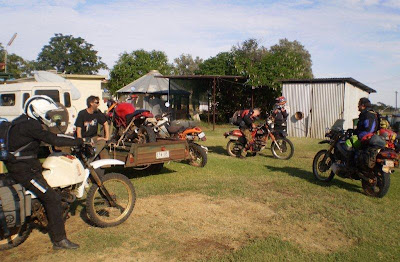