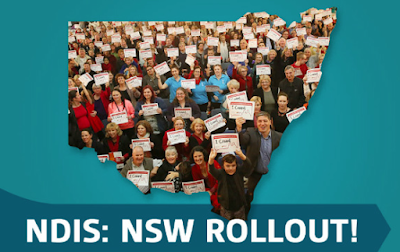 News just in: both the New South Wales and Victorian Premiers have just joined the Prime Minister to release their NDIS roll out plans!

You can now find out when the NDIS is coming to you.

This is a significant milestone on the road to the full roll out of the NDIS across all of Australia.

Thanks to all of you who have campaigned for so long for a better deal for people with disability – we have achieved so much together.

And congratulations to the NSW, Victorian and Federal governments for seeing it through.

NSW Minister for Disability, John Ajaka has created a special message of thanks for Every Australian Counts supporters. You can watch it here.


NSW, Victorians to get NDIS from July 2016
SBS News/AAP 16th September 2015
More than 200,000 Victorians and NSW residents with a disability will start getting national disability insurance scheme packages from mid-2016.

THE premiers of the two states on Wednesday signed long-awaited funding agreements with the commonwealth in Canberra nutting out how the scheme will be rolled out to 245,000 eligible people.

That's more than half of the expected 460,000 across the country due to get the scheme when it's fully rolled out ...
Posted by Blog editor at 11:25