What might the new Prime Minister mean for Australians with a disability? 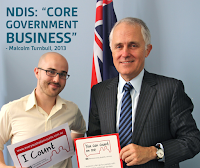 With the change of Prime Minister last night, the disability community is keenly watching for indications of the potential impact on people with disabilities, and those who care for them. Cabinet changes are not expected to be announced until the weekend:

What does our new PM think of the NDIS?

Every Australia Counts, 15th September 2015
As Australia wakes up to the news that Malcolm Turnbull has replaced Tony Abbott as our new Prime Minister, we have a look at what he has said on the public record about the NDIS ...

People with Disability Australia, on Facebook, 15th September 2015
On Twitter our President Craig Wallace congratulated Mr Turnbull on his elevation to the nation's highest office and said we are ready to work with the new Prime Minister on great reforms like the NDIS National DisabilityInsurance Scheme and increasing employment of people with disability.

Craig also called on Mr Turnbull to end the sledging about lifters and leaners, restore the Disability Discrimination Commissioner position and provide funding so the ABC Ramp Up blog can resume operating.


Turnbull Does Not Mean Easy Ride for Social Sector
Xavier Smerdon, Pro Bono News, 15th September 2015
Australia’s social sector has been warned that it will need to work hard to convince Malcolm Turnbull that it is critical to building a stronger and more inclusive economy ...
Posted by Blog editor at 15:03