People with Down syndrome on stage, on the catwalk, on film, behind the camera, in business ... 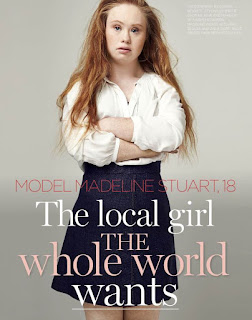 The print edition of the October 2015 issue of the Australian Womens Weekly includes an article on model, Madeline Stuart, the local girl the whole world wants,  by Michael Sheather. The article is in the iPad edition, but not yet linked to the AWW website - we'll post a link if it is added.


Tommy Jessop: ‘Acting is my life’
The Stage, September 2015

Actor Tommy Jessop is performing in Much Ado About Nothing with Blue Apple Theatre, a company for actors with learning difficulties. He has also begun a career in presenting, hosting an episode of BBC’s Inside Out South about his experiences with the production.

What’s It Like To Be A Cinematographer?
Bus Stop Films (blog), 17th September 2015
...  we chat to Bus Stop Alumni, filmmaker, writer and actress, Audrey O’Connor about her experience working as a cinematographer with Henry Smith on our 2012 film, The Interviewer. Audrey also recently and autonomously, shot and edited her own 2 min short film ‘What’s the Mystery’ where she exercised some fantastic cinematic techniques ...

Emma: Master Shredder
Kathleen Calderwood, ABC Open, 17th September 2015
Jo Lynam hoped for years that her daughter Emma would learn to read and write. She thought this skill was essential for Emma to find a job; but it turned out to be the secret of her success.

Emma now runs her own 'master shredder' business in Townsville in north Queensland, and has four clients including solicitors and a credit union ...
Posted by Blog editor at 10:39