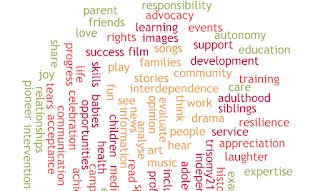 Maxism revisited: a welcome breath of fresh air
Alex McAuley, The Life That Max Built, 10 February 2016
... these things have been in spite of, and as a result of, having Max in our gang. Because after fearing it would be impossible, when it all falls into place, there are no words to describe the joy I feel. So the early anxiety makes the later success so much sweeter.

Hang in there, my friend. Listen to the advice you’re given, but keep an open mind about what you and your little one can achieve and enjoy together.

Brookfield Zoo makes summer camp inclusive and fun
David Perry, Chicago Parent, 3 January 2016
... When I dropped him off on day two, one of his counselors sprang toward me, smiling, with a new plan. Instead of trying to bring Nico to a crowded table, she’d ask him to sit down first and then bring the other children around him. It worked ...


The great escape: people with learning disabilities on what they love best
Amanda Mitchison, The Guardian (UK), 6 February 2016
Lucie loves swimming, Mark is a keen dancer, and Charles likes to climb. Polly Braden spent two years photographing people whose lives have been transformed by one groundbreaking organisation ...

How Down syndrome prenatal screening’s administration is about elimination … and what’s needed to change that
Mark Leach, Down Syndrome Prenatal Testing, 11 February 2016
In her column in Forbes, Kavin Senapathy, a self-styled scientific mythbuster, took on claims that prenatal genetic testing has as its purpose eliminating those with Down syndrome. Unfortunately, her column retold myths and she based her mythbusting on fantasy ...


Local View: Ordinary children, extraordinary joy
J D Flynn, Lincoln Journal Star, 11 February 2016
... conclusions made in the absence of information can be very dangerous. For those who conceive children with Down syndrome, uninformed choices have life-long consequences. In the United States, approximately 60% of parents who receive a prenatal diagnosis of Down syndrome choose to terminate their pregnancy. They often make this decision without medical information, or a meaningful sense of what life is like for Americans with a disability. Even parents who don’t terminate still must often guess and conjecture, often in fear and misunderstanding, about how their lives will change because of children with Down syndrome ...

A Visitor Comes To Ruby's School

Dave Hingsburger, Rolling Around in My Head, 9 February 2016
... she recognized that the young boy in her classroom, talking for himself about his disability and me here writing this blog about my disability are members of the same community. That she sees the community and sees the connection pleases me no end. So many refuse to acknowledge the community, the kinship and the connection between disabled people - even many with disabilities, that her immediate, without question, ability to see how what that boy did there and what I do here are connected ... 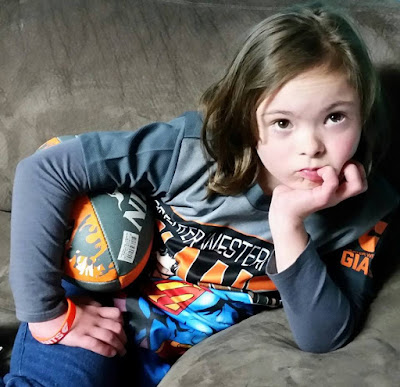