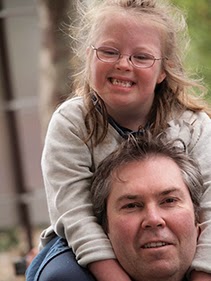 Down Syndrome Australia (DSA) is delighted to congratulate our inaugural Chairman, Mr Angus Graham, on being awarded the Medal in the Order of Australia in the 2014 Queen’s Birthday Honours.

Mr Graham was instrumental in bringing Down Syndrome Australia to life three years ago and in his time as Chair has steered the organisation through many challenging times.

Angus has brought both professional expertise and personal passion to the role, and has dedicated countless hours to ensuring the voice of people with Down syndrome and their families is heard on the national stage.

Down Syndrome Australia was formed three years ago by the state and territory Down syndrome associations to ensure people with Down syndrome had a national voice and to promote genuine community inclusion for people with a disability. DSA works hard to advocate for change and to challenge community perceptions about Down syndrome.

It was however, the birth of the third of his four daughters in 2004 that prompted the focus on improving the lives of people with disability. Henrietta was born with Down syndrome, and it has been for her and other people with Down syndrome that Angus has worked so hard to ensure the existence of a national organisation.

Together with his wife Natalie, Angus has worked tirelessly to improve the economic and social inclusion of people with Down syndrome. While Natalie has served on the Board of Down Syndrome Victoria for many years (four (4) as president), Angus has provided support and leadership through his chairing the Down Syndrome Victoria pilot ‘Mentoring Connections’ program from 2007-2009, his service to Bayley House since 2006 (currently Chairman), his work on the Fundraising Committee of the Financial Markets Foundation for Children and the Mary Jane Lewis Scholarship Foundation, just to mention a few.

Angus and Natalie firmly believe in the value of an inclusive life as Henrietta’s busy life attests. Henrietta attends the same primary school as her sisters, is busy participating in a local ballet school and is currently learning to play netball at the local net-set-go program. Henni is expected to pull her weight with the household chores, she is just one of the ‘Graham Girls’. Of a weekend, Angus and his girls can quite often be found at the MCG in ‘the red and the blue’ hoping and cheering for the Demons to win a game (some things take longer than others, no matter how much you want it to happen!).

The acknowledgement of Mr Graham’s contribution is most welcome at a time when Down Syndrome Australia still finds itself without secure funding and so depends heavily on the support of volunteers.

“Down Syndrome Australia warmly congratulates Angus on his OAM award.”