Is golf or netball your sport? 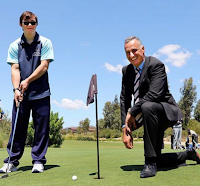 Disability netball shooting goals across NSW
Netball NSW, 31 October 2016
It has been a fantastic year for Disability inclusion in New South Wales, and in particular for netball and all those involved in our wonderful sport.

Throughout 2016 netball Associations and Clubs in NSW, with the support of Netball NSW have worked tirelessly to create a diverse and inclusive environment for Players with a Disability (PWD), and the results have been overwhelming ...
Posted by Blog editor at 08:00