'Stevie won us the Melbourne Cup' 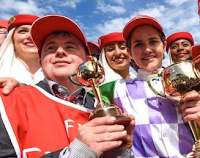 Remember Melbourne Cup Day 2015, when media attention focussed on Stephen Payne's role as strapper to the winner, as well as his sister Michelle's ground-breaking winning ride?
This extract from the book Prince of Penzance: The Extraordinary 2015 Melbourne Cup by Kristen Manning, published by Melbourne Books, was published in the lead up to today's race:

“Don’t get beat, I’ve got my money on you,” said Stevie Payne to his sister, Michelle, as Prince Of Penzance headed out onto the track. He’d had his $10 each-way on, and while many having a punt had done so for sentimental reasons, for Stevie it was a matter of confidence. “He will go close,” he’d been telling all who’d asked about Prince Of Penzance’s chances ...